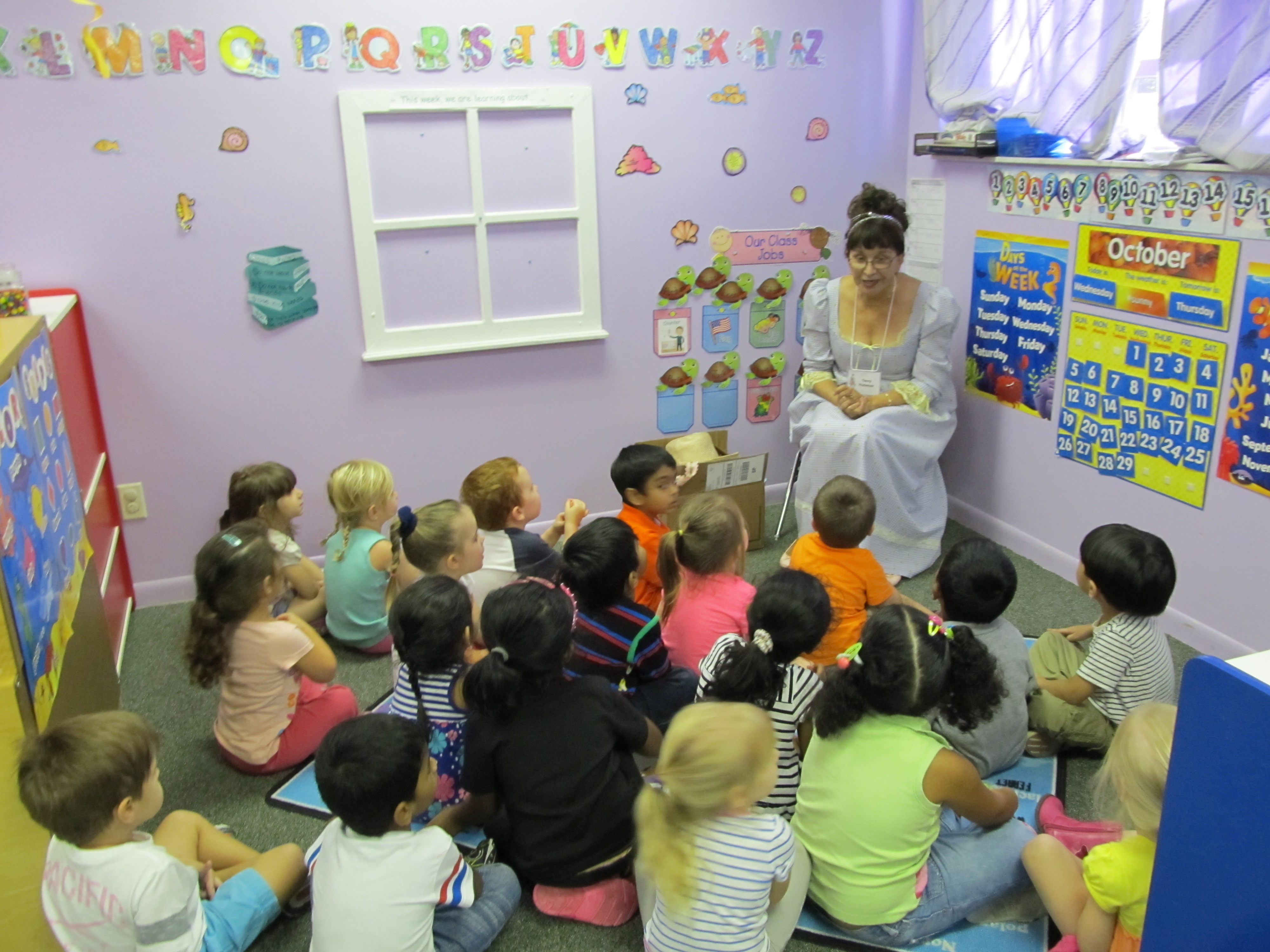 For some time now I had this desire to read Classic Literature, more specifically Jane Austen, to young children.
One of the parents knowing of my involvement with our Jane Austen Region, asked me if I would be  interested in reading to the class where her little daughter attended. I got in touch with the teacher, Ms Aubrey,from the Feathersound Christian School in my neighborhood, who was delighted with the idea. She told me that another teacher, Ms Paula,  asked her if  I did not mind combining  their Pre-K classes and have me read  to all of them. I was in Jane Austen  heaven.
First thing I did was to  order the Little Miss Austen books, Sense and Sensibility and Pride and Prejudice  (baby lit); I needed help telling the story according to their level of understanding.
Dressed up in daytime Regency attire  with hat, gloves, shawl and an up-hair-do, I showed up at the school where an audience of 20 received me with curious eyes.
It was the day before Halloween, so I was not too conspicuous.
I proceeded to explain who I was and why I was dressed that way, and immediately told them I was going to read a story adapted from a Jane Austen book specially designed for them.   I let them know  I was going to ask questions later and repeated the name of Jane Austen several times.  In between explanation  about the characters, settings,  attires,  means of transportation of the time, etc., I always came back and asked the name of the author and everyone responded in unison "Jaaaane  A-u-s-t-e-n." After finishing with  the book,  we attempted a few steps of English Country Dance where you set and cross to progress to  your position in line and did the 6 RH and LH star instead of the regular 4.
The whole experience lasted about 35 to 40 minutes, I gathered my props, said my goodbyes, got several hugs from the little ones  and went home.
Six days later I met with one of the students  who had been particularly  shy during the presentation, I asked her in the presence of her mother if she told her mother about the book, if she liked the dress I was wearing and she enthusiastically said yes, I then asked her if she remembered  the name of the author, and to my surprise she said "Jaaaane A-u-s-t-e-n."   She is 2 month shy of her 4th Birthday.  I don’t need to tell you how happy I was that she remembered.  I asked when she grows up  if she is going to read Jane Austen, and she said "yes" with brilliant eyes and a joyful face.
I would like to  thank the Administrators and  teachers Ms. Aubrey and  Ms Paula  of the Feather Sound Christian Preschool, for their wisdom and assistance in letting me bring Classic Literature into young children's lives.
Judging by  their enthusiasm I am convinced that  Jane Austen “rocks” today as she did yesterday and will continue to do tomorrow.